Pleasure crush the Devils enroute to the final

Pleasure reached the final in style last Sunday as fluffer used his bat and face to score a match-winning 100, with Swoop scooping 4 wickets.

Skiddy’s transport management skills were tested from the start with Didi taxis and wheelbarrows necessary to get us to the ground in the absence of a bus. Skiddy tossed like a pro and put Pleasure into bat.

Two junior bashers looked on, unimpressed by the level of cricket skill. George Spanner was particularly unimpressed. ” Rash is my favourite, he’s not only the most charismatic basher, he’s also the best bowler. The rest, apart from my Dad and Fluffer, are sub par men, and sub par cricketers.”

Swoop and Korean stepped up to undo George’s misgivings, and for a few overs they kept the scoreboard ticking over, and it wasn’t till 30 odd runs were on the board before both wickets fell in quick succession. Sir Dick got out caught and bowled. He restrained himself at the crease, and went for a nice walk to cool down.

Tango and Fluffer took the stage to create a match clinching partnership, Tango’s cultured shots complimenting Fluffer’s huge sizes around the ground. Soon both men were 50 up and the score was motoring. Tango ran himself out trying to go for a non-existent run. He had a quick cuddle with fluffer before eventually strolling off the ground, and Fluffer was joined at the crease by a procession of lesser batsmen, until he hit 100, including a huge straight shuiball.

10 runs after his shuiball Fluffer retired to pull a short ball that cannoned into his face. Possessing a face for radio before the ball smacked his cheek, after bleeding all over the outfield, Fluffer looked like a zombie after a high speed car crash and retired hurt.

Bambi and Skiddy hit a few balls at the end for a kind of laurel and hardy cameo, and Pleasure posted 248, a daunting total.

With Fluffer still reeling, Rash opened the bowling attack. After a couple of chances the batsman found him out and he was taken out of the attack. At the other end Swoop had more luck with a couple of wickets.

Fluffer’s face recovered enough to bowl and he put down some quick overs. Swoop took another wicket and Skiddy joined the attack with some floated balls and a couple of uncharacteristic wides.

Shit Shoes providing a crucial break through before drinks. Bambi daydreaming on the deep cover boundary making a regulation catch look splendid. Shit Shoes promptly walked over to the far side toilets to take a mid game shit while the rest of the team enjoyed some much needed drinks. 15 overs bowled, a result guaranteed and pleasure on top!

With Shit Shoes off the ground, Skiddy brought back Swoop who was super again in his second spell.

There were a couple of superb catches by the Bashers, first by Korean behind the wickets grabbing a one handed catch off a faint edge, and then swoop with a super one handed catch at short third. By this time Devils were feeling the pressure, and the run rate was up to 10.

Rash loudly reminded both Devils players at the crease of the task in front of them (despite Swoop’s appeals for sportsmanship) and Shit shoes captured their last remaining batsmen who could have hit runs.

From then on in the game became somewhat farcical. The sun dipped in the sky, and with it the ability to see the ball. Fluffer took a great catch in the murky darkness, and Stroker bowled some balls so high they gathered frost. He took a wicket with a snow ball, and despite protestations to the umpires, the game laboured on with few knowing where the ball was.

Eventually80 runs short Devils conceded they weren’t going to hit 40 runs an over in the dark, and the game was won. With the finals in sight, pleasure rode the victor’s bus via Jiangsu back to the camel. 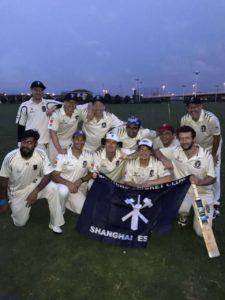 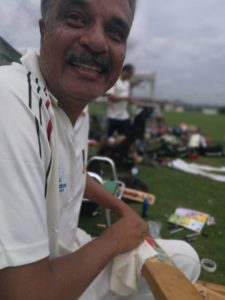 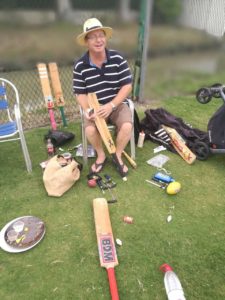 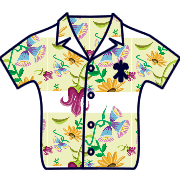